Sorry it’s taken a bit of time to get round to this latest post, but since getting back from my last trip of the year, I’ve been caught up with all that blissful year-end admin that you somehow manage to justify putting off for the preceding eleven months! Anyway, all that needs to be filed is now, well, filed and I can start looking forward to an exciting 2015.

My last trip of the year was a huge success: time spent in the Arctic in the region of Seal River was well spent, with some fantastic polar bear activity, accompanied by a smattering of arctic hares and foxes. 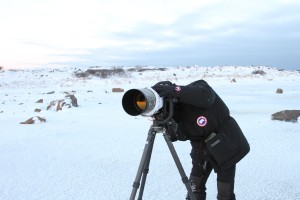 In the Arctic in the region of Seal River

The weather, as ever, was, shall we way, “festive”, dropping to an eye-watering (well, freezing actually) -40C during my stay there, but the colder it gets, the more the bears move about, and as such there are always compensations for numb extremities!

The only disappointing thing about the trip was that I was test-driving some new, heated inner gloves…which were great….indoors! Unfortunately, it would appear that the manufacturers hadn’t actually anticipated that people using these gloves would want to use them in sub-zero conditions, with the result that the battery life was measured in nano-seconds once I was actually outside.

I won’t embarrass them by mentioning their name, but suffice to say, they will not be making it into the kit bag for my trips to Wapusk in February and March – more on those next month.

I’ll be putting together a gallery on this year’s trip once I’ve managed to sort those pictures that will not be released to agencies and books, and then that will be online in the new year. In fact, keep an eye out for a new book I will be releasing next year about the arctic, more on that in January!

So that’s it for this year – I realise you all have presents to wrap and relatives to avoid, so I won’t take up too much time! Off to India in January, and back to Kanha (a park where I’ve not been for 10 years), so fingers crossed it’s still holding its own in the relentless war against tiger poaching.

Oh, one last thing: a big thank you to the staff and pupils of Hangleton Junior School in Hove, Sussex for hosting me last week. We had a fun-filled hour of videos and photos, and lively discussion about wildlife photography – here’s hoping that some of those present get the bug and make it their life ambition too!

Happy Christmas everyone, and a peaceful and healthy New Year!