Ok, so, I have to start this particular blog post with a slight confession. I haven’t actually written this one in the last couple of days, as by the time it goes live I will be quite literally, “up north” in the frozen desolation of northern Manitoba, waiting for polar bears.

Why, you ask?  Well, when it hits -30 degrees, I sometimes find myself asking that question too! But there’s no escaping the thrill of staring down the world’s biggest land carnivore on foot. On the basis it all goes well, I’ll be posting an update when I finally get somewhere more, well, warm and digitally connected!

So, I’ve left this one in the capable hands of my good friend, Colin, to put online in my absence. 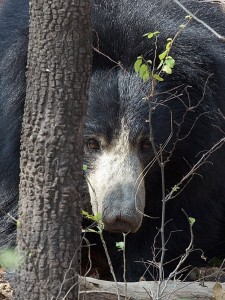 View the Baloo gallery by clicking on the image

As you may have seen, I’ve put a couple more galleries up from this year’s expeditions, and one I really wanted to hone in on was that entitled “Baloo”.

Of course, most (if not all) of you will immediately associate the name with the slightly overweight, laid-back bear of Jungle Book fame. However, how many of you get the image of that oversized, grey (and unfortunately singing!) bear from the animated version of the story?

Most probably the majority, I know I certainly do. Baloo may have been the loveable rogue in the film, but his original character was created on the pages of Rudyard Kipling’s classic tale.

This compelling read – and it really is one book that surpasses the film, despite Disney’s genius – was distilled from Kipling’s own observations of the jungles of Madhya Pradesh in central India. Indeed, the inter-connected swathes of deep, dark forest spanning this enormous State, are often referred to as “Kipling country”.

The, largely contiguous, environment plays host to many of the sub-continent’s major mammal species, as well as considerable numbers of its lesser-known denizens, all living cheek-by-jowl with villages, temples and the ever-increasing pressures of the urbanization of rural India.

I’ve been lucky enough to spend quite a bit of time in the country over the years, but it has been that most of my trips were focused on tigers. In fact, I’ll be there again in January next year on that basis. As such, when I was putting together my ideas for a trip this year, I decided that I wanted to put one of India’s equally iconic mammals in the spotlight, the sloth bear.

Most encounters with these forest-hoovers (and I say that advisedly, as they spend about 90% of their time with their twitching snouts to the ground seeking termite nests) are brief at best, and they are notoriously difficult to see with any regularity, especially during daylight.

They, like most bears, move and eat when they need to, and when they don’t, they simply park up, lay down and slumber. Added to that, they tend to move around in the deepest parts of the forested terrain they call home, making lighting conditions, and even just clear sightings, almost impossible.

However, armed with all the caveats, I headed to a little-known corner of Madhya’s mighty forests in February, namely the Satpura hills. Here, over the course of a couple of weeks, I managed to follow and photograph (thanks to the skills of my accompanying naturalist and indefatigable forest guide!) a cluster of bears and cubs as they went about their daily business. I had sought out Baloo, and found him (well, and her!).

I hope you enjoy having a look through the images – there are more to process – and perhaps the next time you seek out that movie (or the book), you’ll have a slightly different take on what this bear really must have been like when Mr Kipling first spied him and decided to make him one of his central characters.

Now, I’ve spent all this time talking about bears, and yet at the top of this blog post there’s a black and white image that seemingly shows a whole bunch of tree-trunks. All I can say is….look again 😉

Hidden at the bottom, slightly to the right of centre as you look you will see one of India’s other most celebrated, and rarely-ever photographed, species….the leopard.

Yep, look hard, and there, through the tiniest gap in the foliage you will see the handsome face of a young male staring back down the barrel of the lens at me. We found this guy late one afternoon – again in Satpura – as the light faded. He was onto me in no time, and slunk away to an almost impenetrable thicket.

The next couple of hours consisted of frantic searching, particularly as the region’s famed clear weather on that day had decided to desert me, and the thickening cloud was adding to the challenges of searching what was becoming an ever-darker forest.

However, in the end, we managed to manoeuvre into a position for a shot. I purposefully opted to take a wider view on this particular image, as I wanted to convey to everyone the density of this forest, and by presenting the image in black and white, it gives you a deer’s-eye view of what walking through this landscape must be like, not knowing what predator lies ahead, and where he might be laying.

Having now re-looked at the picture yourself….who’s up for a stroll in the woods around dusk?….!