As ever, I’m hopelessly behind! It’s been a busy year to date, and, well, it’s about to get a darn sight busier too as I’m basically going to be out of the country for much of the remainder of the year…starting this week with a trip to Namibia and Botswana. If you’re one of the group joining me in Vic Falls and Chobe in a couple of weeks’ time, we’re going to have a ball! For me after that, it will be Canada, Zimbabwe, Zambia, Alaska, Brazil, Botswana and Canada again to see off the year…all wrapping up in mid-November. Blink and you miss it sometimes, it’s hard to believe that I’m looking at what to do for Christmas already!?!

The year so far…

Work has taken me to India for the wolves and jungle cats of Gujarat, the zebra migration in Botswana and for polar bear cubs in arctic Canada so far this year. Of all these, the Botswana trip was potentially the most productive, given the access I managed to get to one of the lion prides that stalk this striped exodus as it flim-flams its way across the middle of the country. I based myself in Nxai Pan, the Makgadikadi (probably spelled that wrong…always do…and can barely say it…) and the CKGR, or “Central Kalahari Game Reserve” for a few weeks. The game was prolific, the encounters excellent, and those that follow facebook will have seen how sometimes the meerkats in particular were hugely keen to get in on the act. As always, I’m happy to discuss some of the options with you if you’d like to travel to that part of the world, and see it the way I do. I won’t be leading trips there, but can certainly hook you up. Fantastic encounters at a brown hyena den also provided me with some highlights – the first time I’d had a successful den site for these guys in particular! – and all in all it was a great trip with plenty of usable imagery. Nothing for the galleries of course, but for articles and a couple of book contributions, it certainly did the job!

I don’t often shoot commercially in India these days. In fact, prior to this year it was actually back in 2014 when I had shot sloth bears that the last time the coffers filled on the basis of an India-based commission. It was therefore with a bit of trepidation that I took up the assignment in January to capture the Indian wolf, and as there was really only one part of India where sightings are “relatively” regular, I decided that a bit of new year sunshine (it was early January) wouldn’t go amiss. The region I worked in was a few hours drive from Ahmedabad, and ultimately proved very productive for both wolf sightings and also those of jungle cat. There are no real other threats to these predators in the region; an occasional lion has ambled down from Gir, a couple of hundred kilometres away, in the past, but it’s rare, and as such this canid reigns supreme. Of course, one trip to do an assignment such as this is rarely going to bring you 100% of what you need, and as such discussions are ongoing as to when I will go back and attempt to finish the job. However, I had excellent sightings in good light, and some very useable stuff came from it. 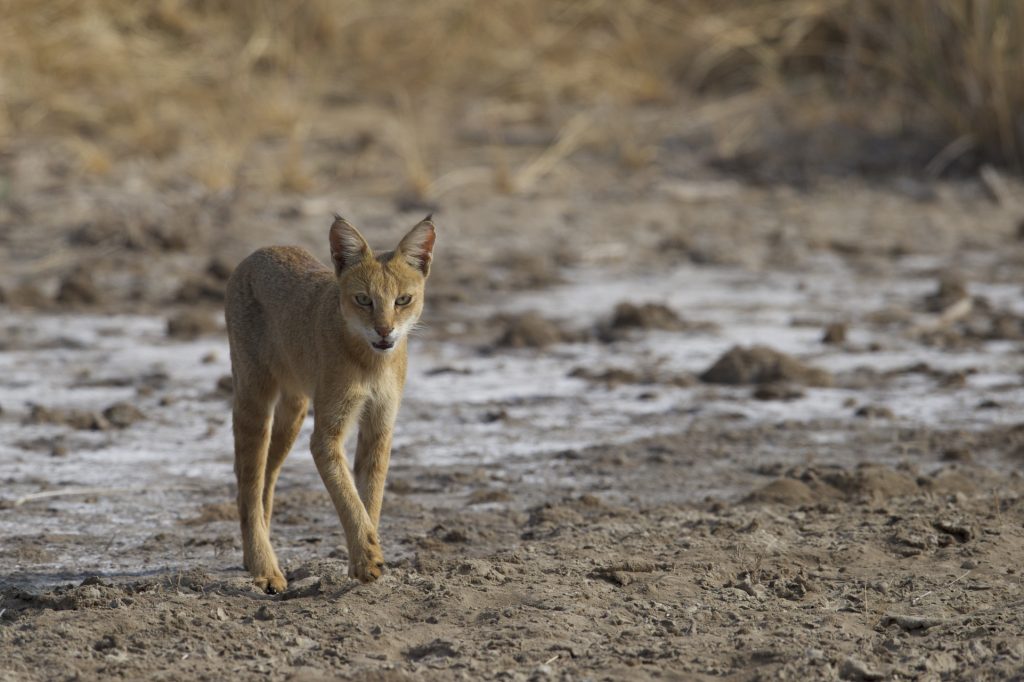 What I would say is that, as usual, the pains of working in India still try the patience of most. Suffice to say the bureaucracy is still as bad as it always was, the permits the same nightmare they have always been, and the education of the driver and guide still one of the first challenges when on site. However, despite all this, the country’s wildlife remains as spectacular as ever….after all, most people don’t even KNOW there’s an Indian wolf…so anything we can do to bring its plight to even the national, let alone international, conscience can’t be a bad thing…

After last year’s wipeout, this year’s trip to Baffin, where a bunch of other photographers also accompanied me, was a resounding success. Mothers and cubs, mothers and yearlings, icebergs, northern lights…and, well, the whole arctic package really meant that this was a true winner. The camp we used this time was a much more integrated set-up, and the “arctic oven” tents really fitted the bill when it came to warming up after looooooooonggggg days out on the ice. I have to say, that no matter how many times I travel to the arctic, I’m always blown away by it, and this year was no exception. The isolation, the spires of iceberg cathedrals pointing skywards from an ocean of flat white and every so often a buttery-coloured, furry point of interest loping its way across a silent landscape make for one of the most soul-enriching experiences you can have. Yes, it’s cold; yes, we live off wet-wipes…but ultimately, this is an experience that should be right up on there on your “to do” list. 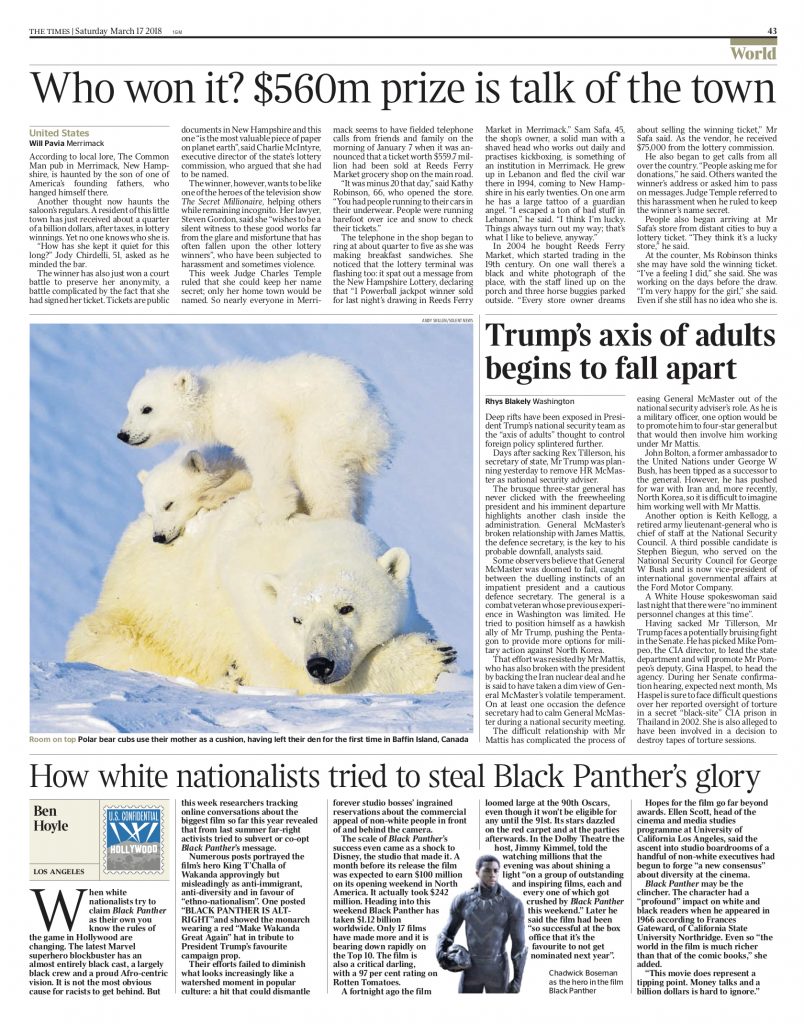 If you’re keen to see this marvel for yourself, let me know. I can book you in for 2019, and in 2020 will be able to accompany the trip (other commitments next year mean that I will be watching, alas, from afar…).

As you know, and as I’ve always advocated, there’s only ONE way to experience the arctic…and that’s on foot. Throw away your cruise ship and tundra buggy ambitions, and instead embark upon a proper, eye to eye adventure whether that be in the high arctic in Spring, or with me at the lodges of Churchill Wild in the Autumn – where you can get the full lot…bears, wolves, caribou, moose and all manner of fox and other stuff…all at ground level, and on your terms.

It’s been difficult squeezing these in, but I’ve managed to be at the New York Travel Show, the Adventure Travel Show (London) and the Photography Show in Birmingham this year, as well as exhibiting limited editions at Reading, Badminton and Teddington too. For exhibitions, that’s it for this year – and we’ll get those orders sorted in the next month…I promise!…and talks are now progressing about getting a central London venue sorted for either Q4 this year or (more realistically) Q1 2019. I’ll keep you posted of course! It’s also been a delight to squeeze in six talks this year so far, and with five more to come in the de days I ‘m home between now and year-end, it’s certainly going to be busy. If you’re interested in putting me in your sights for a speech, then drop me a line as I’m now looking H2 2020 realistically.

Judging competitions is of course one of the other delights of my profession, and I’ve been blown away twice this year with the Nat Geo Traveller Photo of the Year entries and also those in the Latin American Tourist Association awards. It was a great privilege to cast my eye over all those finalists and help select ultimate winners, and I greatly enjoyed the chance to host the evening for Nat Geo awards in London back in February – great fun and a great night had by all!

On another, I’m delighted to announced that I’ve been asked to be one of the headline speakers at next year’s London Adventure Travel Show in January – so I’ll be letting you know more of those details as the year unfolds.

With regards to limited editions, four images are about to conclude their runs – and as such will be dropping from the galleries in the next month. I’ll be sad to see them go of course, but happy that they are occupying the walls of many around the globe…thanks to all those who’ve got one! I’ll be putting up half a dozen new images in the next month…so check back in July to see the latest editions. As I build towards next year’s major exhibition, we will be seeing another 20 images released too as others also finish their run. For those thinking of buying one that’s in a gallery at present – get in touch in case your intended is one of those that is down to its last 1 or 2 editions.

Talking of 2020 (what a segue eh?!), I’m delighted to let those of you know who are on the wait list for trips, that we’ll have everything finalized for 2020 by the end of June. If you’re on the email list, you’ll be the first to know. I know that year seems a way off, but as these trips are limited in number and size, they fill early. Indeed, we’ve had to lay on an extra Botswana and Brazil trip in 2019 to cope. Everything is currently full for this year and next, so if you’re looking to get on an exciting adventure in 2020, keep ‘em peeled for when the newsletter comes out. If you want to make sure you receive it – make sure you email me directly to get your name on the list! Usually, by the time I get to putting them on the website, the trips are pretty much full…

Right, that’s it for now – I’ll post again in a couple of weeks to keep you in the loop as things develop!