Well, my time at Madikwe, in South Africa’s north-western province, is almost at an end, with just a couple more days before I head for home. As I sit here outside my tent in the middle of the day, the waters of the Marico river idle their way past beneath a palette of crimson Tamboti leaves as the colours of winter take full hold.

Indeed, with every passing breath of wind, another shower of is coaxed from these latex-laden trees and onto the turbid, green conveyor belt that plots a sinewy bath beneath them, and onto in Botswana.

This restored and thriving corner of the country is one of the greatest conservation success stories of modern times. Its Kalahari sands and cotton soils, kopjes and inselbergs, forests and bushveld provide a startling diversity of habitats which in turn mark it out as one of the most rewarding safari, and photographic, experiences anywhere in the Southern African region.

As many of you will have already seen on Facebook, in addition to the big game that once again flourishes in the area, it is the smaller, more elusive animals that mark this location out as one worth of a lengthy exploration.

Indeed, it had been with this in mind that I’d decided to squeeze in the trip, knowing that the breadth of ecosystems here, coupled with the onset of winter, could throw up some unexpected sightings. Needless to say, the Aardwolf that fronts this post goes down as one surprise that had not even been on the radar before I got here.

I had chosen to come to the reserve to seek out some of the specialities that these environments can provide, with a focus on den activity and hyenas, in particular the Brown , rather than spotted, cousin. 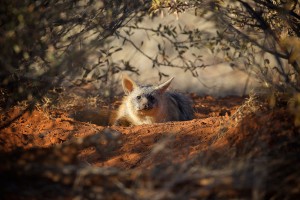 We had heard of den activity in a couple of places and felt that these would be a great place to kick of the stay and on the first morning eventually tracked down one of the sites that we were seeking as the sun started to creep over the eastern mountains and illuminate the sand like a floodlight fills a stadium. As we bushwhacked our way through the scrub, looking intently for what could be the actual den itself, I caught sight of a pair of pointed ears, backlit and unidentifiable, but very definitely mammalian.

The open landrover I was in was repositioned – keeping a discreet distance so as not to cause any disturbance – and once I was happy with the shot we had lined up, I lay flat and peered through the viewfinder.

There, staring back down the barrel of my lens was not the brown hyena I had originally hoped for….but something far, far rarer: an Aardwolf.

For the next hour I watched this most elusive, diminutive insectivore warm itself on the top of its den after a busy night’s termite collecting.

To see an Aardwolf is normally the holy grail, and usually occurs fleetingly, at distance, and in the fringes of a night-drive spotlight. To see one, therefore, relaxed on a den site, allowing me a couple of changes of camera angle with barely the raise of an eyebrow was nothing short of miraculous.

When I finally left the site, as this young female decided she had warmed herself enough and wanted a quiet day snoozing in the cool of the Kalahari sand in which she had made her home, you would have needed a hammer and chisel to remove the grin from my face.