Sorry it’s been a bit of a wait, but I’ve been snowed under (no pun intended) with admin and the like in the last few weeks, and am currently in between trips to – yep you guessed it – the Canadian Arctic.

It seems my life has been dominated by polar bears in the last few months, and it shows no signs of abating for the next few weeks as I’ll be heading back there in a fortnight for my final shots of the “winter”. 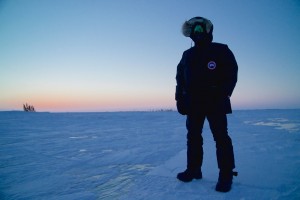 The destination at this time of year is Wapusk National Park that lies south-east of Churchill, up in Manitoba. Staying at the – amazingly comfortable! – Watchee Lodge (a former naval signals camp that has been converted to cope with idiots like me who want to go and stand in temperatures sliding down to -50 celsius) – my guides scoured the surrounding tundra for signs of polar bear denning activity, and once found, we simply staked them out and waited for mums and cubs to put their noses above the snow after three months of sitting around.

Of course at this time of year, it’s not so much the adults we are keen on seeing – although, every polar bear is of course always a privilege, but the cubs.

To see these little guys pop out for their first view of the world is something else: bear (ho ho…) in mind that they have spent 3-4 months in the warmth of a dark den, curled up next to their mother and doing nothing much more than nursing and sleeping, you can just imagine what must be going through their minds when they emerge into a world of marrow-numbing cold, bright light, snow and, people like me covered head to toe and pointing an enormous piece of glass straight at them! It’s quite an entrance…

I was lucky enough to get a mum and twins on two consecutive days (the second cut short by a blizzard which left us navigating to the lodge via GPS and hope) and when I get back there in a couple of weeks, I’ll be hoping that even more bears are starting to emerge.

That said… it is possible to draw a complete blank, as even with the expertise of the guides, you are looking for the proverbial needle! Indeed, after staring at a snowbank for 5 days on this particular trip as every part of my body seemed to slowly freeze (regardless of the multiple layers I was decked out in!), there was the feeling that this might turn into one of those trips! Luckily it didn’t!

Anyway, I’ll be posting up a gallery of the images after the next trip, as some will be released as limited edition prints in the middle of this year.

I’ll be posting an image a week on there once I can get started on it. I think the 10,500 likes or so that my lion cub generated on National Geographic’s website was the bit that tipped him over the edge to say it was about time I had a page people could visit too!